Meeting with the Chairman of the Government

October 9, All-Russian Exhibition Centre in Moscow hosted the opening of the XV Russian Agro-Industrial Exhibition “Golden Autumn” that was attended by Chairman of the Russian Government Dmitry Medvedev. Members of «ISC» CJSC headed by General director Petr Panteleev, and “Kohlbecker & Antonyuk” LLC, the company performing the project construction development, took part in the exhibition operation.
Governor of the Rostov Region Vasily Golubev presented an investment project of construction of the first sugar plant in the region. The Chairman studied the model of the plant general layout closely and inquired of the situation with the stock availability and sales market for the emerging production. In response to the question, he received a comprehensive explanation from the investor – the head of “International Sugar Corporation” – Petr Panteleev. Dmitry Medvedev also discussed matters of fund-raising for the plant construction with Deputy Chairman of the Government of the Russian Federation Arkady Dvorkovich and Minister of Agriculture of the Russian Federation Nickolay Fedorov.
Governor Vasily Golubev laid emphasis on the need for expanding agricultural products processing capacities and for investment promotion in order to create modern and effective production, as well as thanked Dmitry Medvedev for appreciation and support in these questions solution. 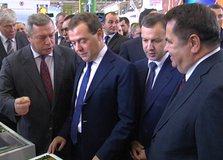 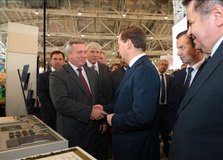 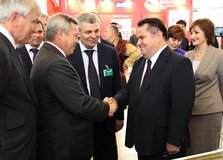 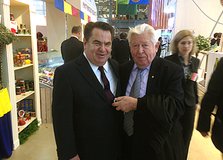 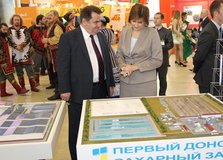 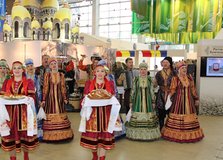