In two years to come the Rostov Region will see construction of its first sugar plant. It will be one of the most modern plants in Russia and Europe. There hasn’t been a single sugar plant in this region until now, even though the sugar beet cultivated amounts to about one million tons. And farmers have been taking it hundreds kilometers away for procession at the Krasnodar Territory plants.
Six modern high-tech sugar plants are planned for construction in the near future in Russia. This is the task undertaken by the International Sugar Corporation (ISC CJSC). The company aims to reduce import of sugar as final output, by increasing home sugar beet production and processing.
The matter of the fact is that when the neighbouring Kuban is enjoying six sugar beet processing plants of different capacity, the Don area has been listening to jelly-talks of just one sugar plant construction for years.
Why would it? The answer is simple. Sugar beet has always been a profitable crop here and farmers are well familiar with it. The only thing is that local authorities couldn’t find financing. It has always been a headache to transport raw material to external processors when it comes both to its reception and payments concerned. Probably due to all these factors and definitely thanks to Governor Vasily Golubev’s initiative and persistence, it is the Don area that has been selected for construction of the first plant out of six planned in the project mentioned above, and the Tselinsky district in particular.
It’s worth mentioning, that the “Agricultural Development and Agricultural Products, Raw Material and Food Markets Regulation Government Program on 2013-2020 years” has given impulse to it. Core products output volume in the Rostov region is expected to rise as the project implementation result. For instance, grain production should rise up to 7,8 mln tons (24% growth), sugar beet – 1,3 mln tons with 117% growth.
In the second half of 2012, the concept of the project got itself an investor who happened to be the above-mentioned International Sugar Corporation in cooperation with French company SUCDEN. It should be noted, that being an acknowledged leader in this field, ISC already has construction of four sugar plants under its belt, all in Russia. One of those – Dobrinsky plant in the Lipetsk Region – processed 1 mln. 300 thd tons of sugar beet last year.
Ownership of 100 thd hectares of agricultural land is also speaking in favour of the investor. Another vast thing in favour of ISC and SUCDEN is the experiment of introduction of new sugar beet cultivation technology in the Stavropol Region. Having taken beet reproduction cycle under control contractually, sugar producers managed to obtain an 800-hundredweight crop yield per hectare.
The most advanced sugar beet processing technologies have been laid basis for the plant construction. It isn’t everywhere that dry pulp is to be processed directly at the plant but here it is. In addition to these innovations, another plant will be put up near the Donskoy sugar plant and its sugar beet processing complex. That is to be an export bioethanol production plant, construction of which will be undertaken in cooperation with Crystal Union, another French company.
Modern production facilities will be erected with consideration for international experience gained in this field. Other four global companies, that have distinguished themselves at the European sugar plants construction sites, are also engaged in the process. 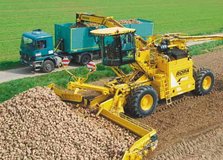