At the recent meeting in Rostov-on-Don Vasily Golubev and Chairman of State Corporation “Bank for Development and Foreign Economic Affairs” Vladimir Dmitriev discussed performance of the agreement signed at investment forum “Sochi-2013”.
Among other things, they discussed implementation process of pilot project of construction of water sports recreation centers developed in course of public-private partnership in Rostov Region. Current matters of implementation of other projects by “MTE KOVOSVIT MAS” (LLC), “Eurodon” Group and INTERNATIONAL SUGAR CORPORATION were also regarded at the meeting.
It is to be recalled that there are 12 investment projects implemented in Rostov Region in association with State Corporation “Bank for Development and Foreign Economic Affairs”, out of the 14 projects which, according to the agreement signed in Sochi , were included into the bilateral plan of co-operative activities on the Rostov Region development in 2013-2018.
Vasily Golubev offered the Vnesheconombank Chairman to extend cooperation through participation in new socially important investment projects, including those in infrastructure.
It should be noted that the plan of activities signed by Governor Vasily Golubev and Chairman of Vnesheconombank Vladimir Dmitriev at investment forum “Sochi-2013” includes implementation of 34 projects with total investment amount of 179,5 bln rubles. Thus, there are 19,9 thousand news jobs to be created. This plan includes projects of construction and reconstruction of utilities and transport infrastructure facilities, industrial parks development, support for small and medium enterprises and others. 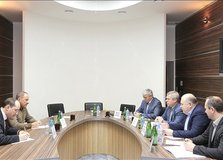