Essential agro-industrial projects were presented to Dmitry Medvedev by governor Vasily Golubev at the Forum in Rostov Press source: RBC

This Friday, Chairman of the Government of the Russian Federation Dmitry Medvedev examined expositions from Russian regions – main food suppliers in Russia – presented at I National Forum of Food Security. The largest exposition was held by the event host – Rostov Region.
As governor Vasily Golubev explained to Dmitry Medvedev, the venue for the Forum was chosen for a reason. The names of towns and other settlements in this region are some way or another connected with food – Zernograd (Grainville), Maslov (Butterough), Agrarny (Agrarian), Grushevskaya (Peary), Pchelovodny (Beekeeping), Lugovoy (Meadowy) and others. "It is no coincidence that you have chosen this venue. Your choice to support us has hit the mark. At this exposition we have presented everything that our region produces. Furthermore, we are showing fine performance. Country folk have already informed us that this year against all the odds we are going to have bread,” – said Mr. Golubev.
In the center of exposition is situated the Tree of Copiousness with samples of the products manufactured in the region that range from sausages and bakery products to vegetable oil and juices. “Here is where bread comes from. It turns out to grow on trees! That’s a nice tree you have here.” – smiled Mr. Medvedev.
Governor Golubev presented Mr. Medvedev some key investment projects that the region is willing to implement. “One of principal directions for us is development of green-house industry that the country lacks so much”, - said the head of the region and added that the projects currently implemented in the region will allow to double the capacity of green-house facilities.
Particularly, Mr. Golubev spoke about eight new green-house construction projects in the region that are currently at the implementation stage. Total amount of investment on these projects should come up to 41,8 billion roubles. Projects implementation period is 2016-2018.
Moreover, the Governor introduced the Chairman another ambitious project – construction of a sugar plant. This project is jointly implemented by INTERNATIONAL SUGAR CORPORATION and SUCDEN GROUP (France).
“Most of processing facilities are situated within the Kransnodar Territory. However, Rostov Region is by any definition one of the best regions in Russia for sugar production. We have investors who are willing to implement this project,” – said Mr. Golubev. “The market is competitive but we still need to look into the project economy”, - emphasized Dmitry Medvedev.
Numerous major agro-industrial concerns took part in the exposition. Rostov Region was presented by ASTON, YUG RUSI (South of Russia), EURODON and ROSTSELMASH.
Let us recall that I National Forum of Food Security took place on June 4-5 in Rostov. Ten Russian regions presented their expositions there. Delegations from 35 Russian regions came to participate in this event. 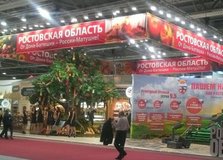